Caught this article on my Google Reader account, and it hit home with me. I’ve been working diligently over the past two years as an advisor for my school’s Technology Student Association (TSA) chapter to get more Latino students interested in technology careers. 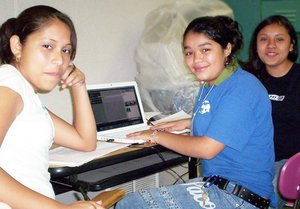 I love what the Chester County Intermediate Unit’s Migrant Education Program has done here. The picture is getting brighter here in Haines City, as many more of our Latino students coming into Boone Middle School are children of parents who have decided to remain here in the city rather than continue their migrant work. These students are becoming more digitally aware through computer usage at home and through “take home PC” programs offered by our school. However, we still have students who miss a great deal of school due to having to relocate with their migrant parents. Programs like the one at CCIU are surely worth replicating at schools like mine, and I am now in the process of trying to secure grant money for a one to one laptop program that will allow students to sign out laptops for use at home as well as in the classroom.

Not three weeks out from me going over points about Cyber Safety with my Boone Middle School 6th, 7th, and 8th graders – Florida Attorney General Bill McCollum spent time talking with Lake Gibson Middle School students about the very real dangers they are exposed to by using the net. Nice to see the State taking a keen interest in spreading the message!

I am a huge proponent of using Web 2.0 applications in the classroom – especially tools like VoiceThread, Skype, Blogs, and the like. I share the notion of folks like Dean Shareski, who believe that students should be taught to navigate the web from outside the walled garden of school-based proxy filters. I’m real with my students about the dangers that are out there. Sometimes to the point of scaring them. But we push the envelope with Web 2.0 as much as we can – putting projects out there for people to see, sharing our thoughts and ideas about various topics, etc – and it’s my job to be sure that these great kids have the knowledge they need to access the web safely.

Our local Sheriff’s department is taking steps to help educate and protect students as well. The topic of the “LMIRL” (Let’s meet in real life) came up, and McCollum used stories of how online predators work to teach a valuable lesson on how to steer clear of such individuals.

Polk County Sheriff Grady Judd, who was on hand to talk to the students Monday, said his office is working hard to protect them. In undercover online stings, the Sheriff’s Office has arrested men who thought they were meeting children.

“We’ve arrested over 85 people who thought they were talking to someone your age,” Judd said.

McCollum said Judd and his agency are “pioneers in cybersafety,” in conducting the stings and providing education on online predators and hopes other counties will follow.

Now students can add both the Sheriff’s Office and the Attorney General’s Office as MySpace friends.

“There will be a star on your page and it tells the predator that you’re saying ‘no’ to old, old men trying to talk to young folks,” Judd told the students.

Maybe Officer McGruff will provide a neat badge for kids to put on their sites as well. I’ll definitely request that one!

Inspired by the digital storytelling work of Wes Fryer and Dean Shareski – and the four slide contest recently hosted by Dan Myer, I decided to start the year off by having my students create a four slide digital storytelling project focusing on the idea of a ‘sequence of events.’ This project was completed as part of an initial digital storytelling effort. Students were directed to describe a process they have gone through in their lives – breaking it up into four sections with each one represented by a single image.

Getting each student up and running with a yahoo.com email account was a challenge, as we spent a great deal of time discussing and implementing Internet safety procedures. Consequently, my middle schoolers now appear online with yahoo.com and gmail.com email accounts as a bunch of 65 year olds living in strange places like Chickenfeed, FL!

I loved this project, and have to say that watching how much my kids got out of it really energized me. I can honestly say that these past few weeks mark the first time in my brief four year teaching career that students literally had to be forced out of my class because they were having so much fun!

Below, you will find entries from a few select students who were kind enough to share them. I hope you enjoy! (Loaded into and shared via Bubbleshare)

First, thanks to Miguel Guhlin for keying me in on Edutopia. I’m sure others have mentioned the site to me, but I came to it via Miguel’s article on its list of 10 edublogs Edutopia loves. I submitted Edutopia’s RSS feed info to my Google Read and was immediately Presented with a post containing a poll asking the following:

Are female students excelling in science, technology, engineering, and math?

Leading off the post, author Sara Bernard states that:

“The goal of achieving gender balance in science, technology, engineering, and math (STEM) fields still holds — and, thanks, to a surfeit of programs for girls such as IBM’s Exploring Interests in Technology and Engineering (EXITE) or TechBridge, in Oakland, California, many people say that the gap is closing. Others argue, however, that a large gap still exists, often due to persistent stereotypes and biases that keep girls from having positive educational experiences that inspire an interest in STEM. Do you see many female students excelling in and pursuing these subjects, or does more need to be done to encourage them? Tell us what you think.”

This question really resonated with me as a Middle School Technology Education Teacher. When I started as the advisor for Boone’s TSA Chapter, I made a decision to recruit a student membership that was truly reflective of the school’s population. At present, we’re at a population of approximately 70% Latino, 25% Black (including Jamaican and Haitian Creole students), and 5% White/Other. I also made the decision to push female involvement – specifically among our minority students. This last decision was based more on a gut feeling I had after teaching Math at Boone for two years – noticing that many of our minority students were living in environments that promoted – whether for reasons cultural or other – domestic skill development in lieu of career and technical skill enhancement.

The first year our TSA club produced two Latinas who earned 1st place in the state of Florida for their respective events, with one other finishing in the top 10. One of these girls continued on to place in the top 10 nationally. Last year, these students each placed 1st in their events at State, and all made the top 10 at our national conference.

We just had our first TSA meeting of the year, and 11 out of 16 students in attendance were females. These girls are smart, eager, and are all very interested in securing officer positions for our chapter. I have high hopes for a great year for Boone TSA, and I believe these young ladies – many who are in either 6th or 7th grade – will play a large role in our success.

Is your school taking steps to encourage more female and minority interest in science and technology? Perhaps you have an exciting and inspirational story to share! 🙂
Technorati Tags: STEM, Technology Education, Science Education

Welcome to your brand new blog!

This is a sidebar and can be changed in Widgets in your dashboard.

You can also modify number of sidebars in theme options!

Notes from the Ridge Archives